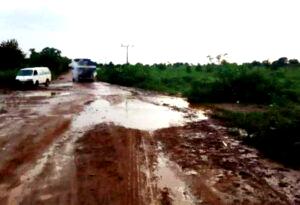 IT has been tales of woes for commuters and motorists coming into Benue State from the southern parts of the country as the two major roads leading into the state have since become death traps due to their lingering poor state. The two major link roads – Makurdi-Aliade Otukpo and Makurdi-Naka-Otukpo – collapsed some months ago and have been left to fester like a big sore leading to unimaginable problem for users on a daily basis.

As the two roads remain in a deplorable shape, farmers, traders and visitors to the state have become the major losers economically and socially. While many avoid the roads as a result of their deplorable condition, those who dare to brave them, lose their goods and trucks to the gallops and big ditches along the roads. Mostly affected are trucks laden with fresh and perishable food crops which often get stuck in the bad portions or overturned while trying to meander through the deep gullies which now litter the roads.