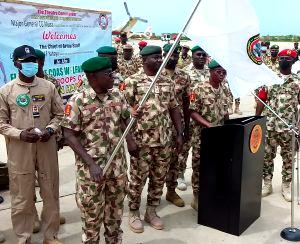 The Chief of Army Staff (COAS), Lt.-Gen. Faruk Yahaya, has urged insurgents, bandits and other violent groups to lay down their arms and surrender before it’s too late.

Yahaya gave the ultimatum on Monday in Maiduguri while addressing troops during the flag-off of a special welfare flight for personnel of Joint Task Force “Operation Hadin Kai”.

“We are getting them in droves surrendering already and we urge them to continue to surrender and lay down their arms and tow the line of peace.

“They other ones in the bush should also come out and surrender so that we conclude.

“If they failed, we will get to them; we have gotten some and will get to all who failed to surrender whether in North East, North West or North Central,” Yahaya said.