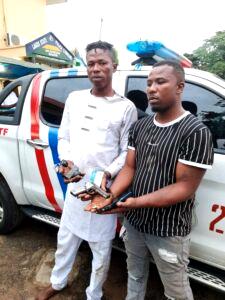 The suspects, Samuel Akabueze, (31yrs), of 34, Valentine Obasi Street, Idimu Road, and Onuoha Joshua, (37yrs), of 52, Yusuf Street, Ipaja were arrested for driving a Lexus jeep (LSD 666 GK), suspiciously along Akowonjo Road by the RRS operatives who trailed them to the point of arrest after suspecting them of underhand dealings.

It was learned that exhibits found on them include a locally made gun with two rounds of ammunition, four ATM cards, consisting of Eco and Access banks, charms, BRT cowry card, two different keys of another different Lexus SUV, and a motorcycle.

Upon interrogation, they were found to be notorious criminals perpetrating series of robberies across different locations in Lagos. They both confessed to being members of ‘Aye Confraternity’.