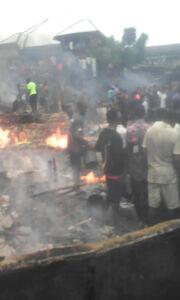 Chukwuma Atamkpo, member, PHALGA Security Service, said a female resident forgot to put off a candle which sparked the fire and spread to other apartments, gutting the makeshift houses.

Narrating the incident, Christain Alali, said an unidentified resident forgot to put off a stove that later exploded into the fire that gutted the makeshift houses.

Two female residents lamented that they were at work when the fire started only to get home to meet their apartment and entire belongings razed. They called on Government to come to victims’ rescue.