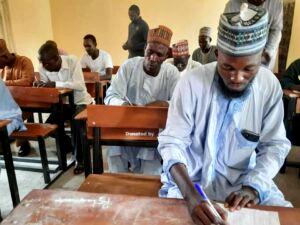 As the Governor of Borno State, Professor Babagana Umara Zulum spends a night in Baga, a famous fishing area on the shores of Lake Chad, he had yesterday met with school teachers numbering sixty-five, where he put them to an impromptu aptitude test to determine the level of their qualifications and ability to teach.

The Governor also visited Baga hospital, interacted and gave support to health workers as another 4,798 persons in Baga and Cross Kauwa received humanitarian aid on his way back.

Zulum told the teachers that the essence of the aptitude test is not to sack anyone, but to determine their capacity and know where to place them.

Those that have no capacity to teach would be given a choice, either to redeploy them to the administrative department or send them for further training.

Zulum said that at the end of each year, every teacher and his pupils will be…

PANDEF demands increase in derivation from 13% to 50%