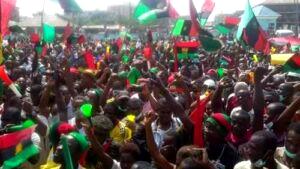 The Directorate of States, of the Indigenous People of Biafra, DOS, has suspended the Monday weekly Sit-at-home it ordered following the alleged Federal Government plan to punish its leader Mazi Nnamdi Kanu in detention through deliberate refusal to bring him to Court for the continuation of his trials.

IPOB in a statement said that it decided to suspend the Monday weekly Sit-at-home because of the directive given by its leader Mazi Nnamdi Kanu.

“The suspension of the Sit-At-Home by the IPOB Head of Directorate, was as a result of a detect order from the leader of this great movement Onyendu Mazi Nnamdi Kanu.”

IPOB however said that henceforth, its Sit-At-Home, will in the mean time be observed on the date of its leader, Mazi Nnamdi Kanu’s Court appearance’s.

“In accordance with the directive from our leader, our Sit-At-Home will in the mean time be observed on the date of our leaders Court appearances.