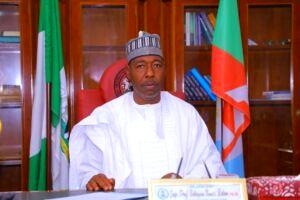 At the hospital, the Governor went round and inspected the health facility, after which he interacted with health workers found on ground numbering twenty-seven.

Zulum also told them that his administration is ready to support up to 50 indigenous persons of Kukawa Local Government, who are willing to further their education, especially younger ones wishing to go for courses in medicine and other related courses.

On discovering that the hospital lacks a medical Doctor, Zulum directed for the appointment of any medical doctor willing to stay and work in the town.

Immediately at the spot, Zulum gave an executive approval of an appointment to a Medical Doctor, who is an indigene of Kukawa.

Each of the twenty-seven health workers got 20,000 Naira support, and a bag…