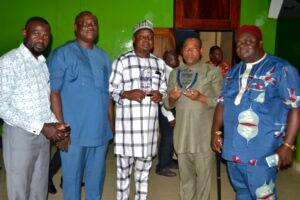 It was another landmark gesture for Cameroon-based Nigeria publisher Ismael Adegbola after he was presented a Merit Award in appreciation towards immense support to the Nigerian community in Cameroon.

These honours took place recently during the inauguration of the newly elected officials of the Ebonyi State Union in Douala, Cameroon.

He was also honored with an honorary chieftaincy title of Nwa Nne Di Na Mba (A brother further afield or a brother in a foreign land) by the Igbo community organized as Ebonyi State Union in Douala under the supervision of Sunday Nwoye who showers encomium on the publisher of the Naija Diaspora magazine for selfless and accommodative support towards every tribe live in the host country.

Adegbola has enjoyed several accolades from different institutions in Cameroon over his positive impact of making one Nigeria possible among the tribes through his media tools. His selfless activities had paved numerous recommendations from many of…