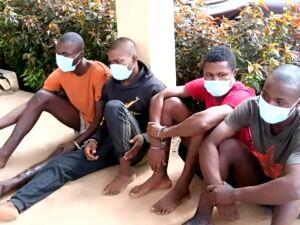 The leader of a four-man armed robbery gang, Banjo Adu, aged 24 alleged to have robbed and killed six persons including POS Operators and two Filling Station attendants has explained why he killed a female POS operator, Miss Adetutu Nofisat Ibrahim in Akure, the Ondo state capital.

Late 28-year-old Adetutu was a staff of First Bank in the state capital.

Banjo told newsmen when his gang members and other suspected criminals were paraded by the state police command that ” When my gang members and I got to the PoS shop of late Miss Adetutu, she refused to give us money on time and I put the trigger on her and I killed her after which we made away with her money.

The suspects had in January this year stormed Owe-Akala area of Oke-Aro, Akure and also robbed a POS shop…