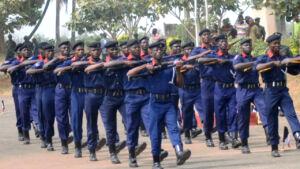 The Nigeria Security and Civil Defence Corps, NSCDC, Lagos State Command, on Friday, smashed an oil vandalism syndicate when they were intercepted in Baruwa, Alimosho Local Government Area of the state.

The NSCDC Commandant in Lagos, Okoro Eweka, who disclosed this while briefing newsmen said the suspected vandals were smashed in collaboration with the Nigerian Navy, in possession of
four trucks, laden with Premium Motor Spirit, PMS, popularly called petrol in Baruwa area.

According to Eweka, “The suspected vandals were caught in the act in the early hours of Friday. They loaded one of the four tracks with products and escaped from the scene.”

NSCDC boss, however, warned vandals to steer clear of Lagos as the corps has been repositioned for better performance to protect government physical infrastructures.

Eweka explained: “These vehicles are purported vandalised vehicles used to vandalise the Premium Motor Spirit (PMS) trucks on the right…