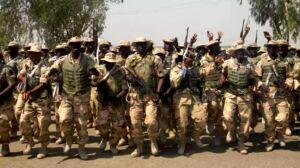 The criminals made a futile effort to infiltrate the town but were met with a fierce counterattack from the vigilant troops, forcing them to retreat in disarray.

“The dogged troops have been commended by the Chief of Army Staff, Lt Gen Faruk Yahaya for their vigilance and swiftness in countering the attack”.

“He also encouraged them to remain focused…