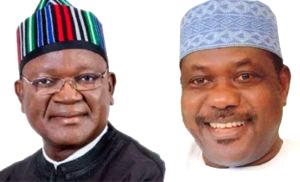 Governor Samuel Ortom of Benue State has threatened legal action against the Minister for Special Duties and Inter-Governmental Affairs, Senator George Akume for leveling allegations of killings and diversion of public funds among others, against him.

The Governor who ,Wednesday, in Makurdi was reacting to last Monday’s press briefing by the Senator Akume and other All Progressive Congress, APC, stakeholders in Abuja described the Senator Akume’s outing as unfortunate.

He said “Senator Akume leveled allegations of killings and several others against me. I do not want to join issues with him. But I have the mandatory right to put the records straight.

“All he said amounts to betrayal, back-stabbing, double crossing, selling out of Benue people, treachery, greed, unfaithfulness and falsehood. All he said were just mere lies just for him to secure his meal ticket from his paymasters but I will not be deterred.