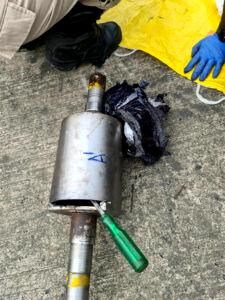 The discovery, which was made during a week-long joint operation by the three services, involved dismantling of the machines and use of dogs.

A source at the ports said the seizure is the fallout of renewed synergy and cooperation aimed at curbing any form of port-related lawlessness.

Comptroller Malanta Ibrahim Yusuf, Area Controller of Apapa Command, Samuel Bashir Gadzama, Commander of NDLEA in Apapa and Officer in charge of the DSS at the port were involved in the operation.

A press statement by the Public Relations Officer of Apapa Area 1 Command of the NCS, Abubakar Isman, noted that further dismantling of cylinders in…