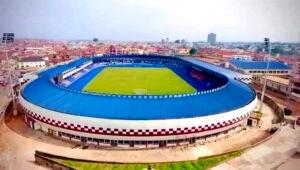 The interim Publicity Secretary of the party, Dr AbdulAzeez Olatunde, said this while speaking to our correspondent in Ibadan on Thursday.

The remodelled stadium was commissioned on Wednesday, with Peoples Democratic Party, PDP, stakeholders, including Alhaji Atiku Abubakar, in attendance.

He explained that the rain has only exposed the weakness of the project, questioning why the pitch will be flooded and the roof of the stadium complex be leaking.

“Its a scam. I have search the internet to see many other world stadiums and I realised we have been scammed big time in Oyo State.

“How can you say you refurbished a stadium for that kind of bogus amount of N5.3 billion.

“In the whole world, with the amount of money spent on the stadium, I have not seen any…