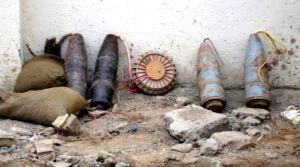 This is a locally made bomb to illustrate the story

THE Presidency yesterday alleged that the Indigenous People of Biafra, IPOB, has amassed a substantial stockpile of weapons and bombs across the country.

The allegation was contained in a statement issued by the Senior Special Assistant to the President on Media and Publicity, Mallam Garba Shehu in Abuja.

The Presidency in a statement titled, “Why Amnesty entreaties should be ignored”, said that  “Amnesty International’s latest salvo at Nigeria is but more of the same.”

The statement read: “Again, they have decided to side with terrorists, before the liberty of those they injure, displace and murder.

“Speaking the language of universal human rights, Amnesty International deploys it only in defence – even outright promotion – of those that violently oppose the Federal Government of Nigeria. Parroting the line of Nnamdi Kanu and IPOB, a proscribed terror organisation,…