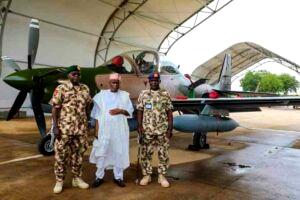 With NAF’s Alpha Jets and Fighter Helicopters sustaining attacks on locations of bandits in Zamfara and Kaduna States in the ongoing military operations, the recently Inducted Super Tucano Aircraft are being test run by the Nigerian Airforce (NAF).

The Minister of Defence, retired General Bashir Magashi made the disclosure to journalists after a three-hour security meeting with  President Muhammadu Buhari held with Security Service Chiefs at the Presidential Villa in Abuja.

According to Magashi, an additional batch of A-29 Super Tucano Jets would arrive in the country next week while the jets in the first batch already delivered were being test run.

The Minister said that the security meeting with the president reviewed the situation in the country and concluded that it could resolve the security challenges, especially in Zamfara State and the North Central, which was of huge concern at the meeting, but with the cooperation of Nigerians.

The security meeting was…