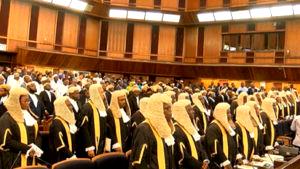 While it has long been suspected by Nigerians that court judgements are often given in favour of the highest bidder, a series of embarrassing judgements by courts with concurrent jurisdictions over the tenure of the chairmanship of People’s Democratic Party, PDP, Uche Secondus has woken up from slumber, the National Judicial Council, NJC which is the apex regulatory authority over the judiciary in Nigeria. But the NJC is only stepping up after what seems like an irreparable damage to the reputation of the judiciary in Nigeria, had been done.

In his bid to halt further exposure of the country’s legal system to ridicule, last Monday, lbrahim Tanko Mohammad, the 18th Chief Justice of Nigeria, CJN, who is the chairman of the NJC, called a meeting of all the six (6) Chief Judges in whose judicial divisions conflicts of court judgements have emanated since June.