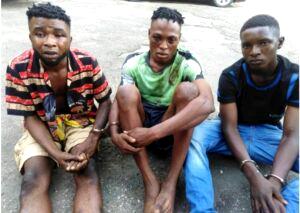 By Mary Benson and IfechukwuAmaizu

The suspects: Rilwan Nasiru,  27; Sodiq Taiwo,  23; and Oladimeji, 20 according to the Lagos State Police Public Relations officer, “ booked UBER service online, lured the driver to Meiran area and strangled him to death.

“The suspects, after the dastardly act, dumped his body on the Abule Egba bridge, along the Lagos/Abeokuta Expressway and made away with his Toyota Corolla Saloon car with Reg. No. KSF 830 GX.

“Following a report by the victim’s fiancée at the Police Division on September 6, 2021, detectives immediately put in motion investigation mechanisms which led to the arrest of the suspects in their criminal hideouts and recovery of the stolen car.

“The Commissioner of Police,…