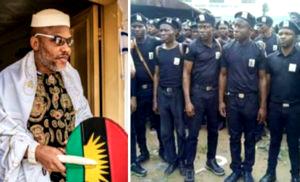 The Indigenous People of Biafra, IPOB, has condemned the killing of an Anglican priest in Ihitteukwa in Orsu Local Government Area of Imo, describing it as a “sponsored attack created by security agencies to demonise” its reputation.

Vanguard reports the enforcers of the sit-at-home order issued by the IPOB, on Tuesday, 14 September, allegedly killed an Anglican Priest, whose name was given as Reverend Emeka Merenu, of St Andrew Personage.

Reacting, the Media and Publicity Secretary for IPOB, Emma Powerful in a statement signed Thursday, debunked the news, saying “anyone pointing accusing fingers at IPOB for such dastardly act is only doing so to demonise IPOB”.

According to him, “we (IPOB) don’t Kill, let alone a priest; is not part of our mandate.

It makes no sense to associate IPOB which is a peaceful movement with such carnivorous behaviour….