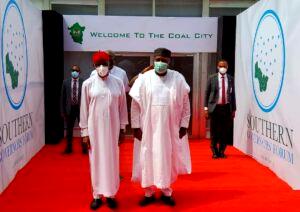 The 17 Southern governors are currently meeting in Enugu state to discuss pressing national issues, release of Nnamdi Kanu and ban on open grazing.

This is coming after their previous meetings in Asaba and Lagos States where they had discussed about ban on open grazing.

The meeting commenced at about 12:45pm with 9 governors and 7 deputy governors in attendance.

The governors were first ushered in to a security guard of honour, and later received by the host Governor, Ifeanyi Ugwuanyi at the government lodge.