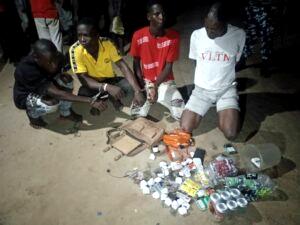 Ajah gave the advice while delivering a paper at the ongoing three-day training on the Implementation of Administration of Criminal Justice Act (ACJA), 2015 and Human Rights for Officials of Nigerian Correctional Service, Nigeria Police Force and Judiciary in Enugu.

The paper was entitled: “Role of the Judiciary and the Courts as well as Innovations in the ACJA Act 2015 and Administration of Criminal Justice (ACJ) Law of Enugu State”.

Ajah noted that parading suspects, even when they are seen in the face of the law as innocent, “is tantamount to media trial”.

According to him, parading a suspect or the media trial of a suspect jeopardises the chances of the suspect getting a fair hearing in the minds of right-thinking members of the public.

The judge noted that the media trial ends up as mental…