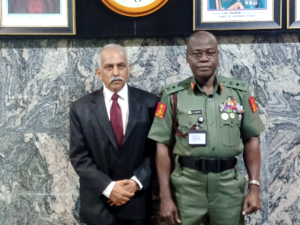 A delegation of Indian Defence Scoping has expressed the readiness of the Indian Armed Forces to strengthen defence ties with the Nigerian Army in furtherance of the existing relationship between India and Nigeria.

The leader of the delegation, retired Lt.-Gen. Vinod Khandare, made the call when he led the team on courtesy visit to the Chief of Army Staff, Lt.-Gen. Faruk Yahaya, on Thursday in Abuja.

Khandare said them members of the delegation comprised representatives from the Indian Army, Navy and Air Force, as well as National Security Council Secretariat and Indian ministries of defence and external affairs.

He said that both Indian and Nigerian armies had maintained cordial relationship in the area of training of officers and their defence colleges over a long time.

Khandare said visit was borne out of the desire to see how the trajectory for cooperation between the two countries could be taken further ahead.

He said that the direction of the…