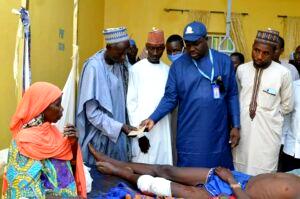 The incidents occurred in the Community of Buwari Degaltura electoral ward of the State.

In an interview with Vanguard, Dr Goje commiserated with the families of those who lost their relatives and prayed Allah to grant quick recovery to those who sustained various degrees of injuries.

“I led my team this morning to the Specialist Hospital Gaidam to see victims of the airstrike.