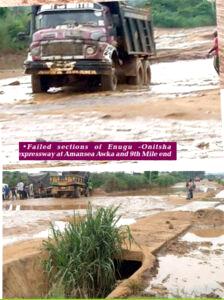 DRIVING through most of the federal roads that crisscross the South-East geopolitical zone has become very agonizing. The Enugu-Onitsha, Onitsha Owerri, Aba-Owerri, Owerri-Umuahia, Enugu-Abakaliki, Oba-Nnewi-Okigwe, among many others are in deplorable condition.

For instance, the journey from Enugu to Onitsha which, in the good old days, used to take less than one hour now takes about six hours. Same for Enugu-Aba and Onitsha-Owerri.

In fact, motorists have totally abandoned the 82 Division- 9th mile section of the degraded Enugu-Onitsha expressway, due to its impassibility, thereby forcing commuters to overuse the single lane of Trans-Ekulu bridge, which often results in a terrible gridlock all day round.

In Enugu, both lanes of the road from Abakpa junction are in grave degradation such that vehicles, particularly heavy duty trucks are in constant breakdowns on the road thereby compounding traffic…