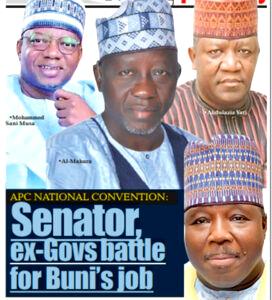 The battle for the national chairmanship of the ruling All Progressives Congress APC has begun with several stakeholders making behind-the-scenes consultations on their prospects of taking over from the Caretaker National Chairman, Gov. Mai Mala Buni.

The moves followed the conclusion of APC’s membership registration and revalidation exercise as well as the commencement of its Congresses which states from the Ward level ahead of its National Convention.

Also, in the wake of the controversy generated by the Supreme Court judgment on the Ondo Governorship election vis a vis the implications of the dissenting judgment for the APC, there have been increased political horse trading among aspirants for party positions.

A 4-3 split decision of the court had dismissed the petition filed by the Peoples Democratic Party PDP aspirant in the 2020 Ondo State Governorship Election, Eyitayo Jegede SAN against the incumbent Governor of Ondo State, Rotimi…