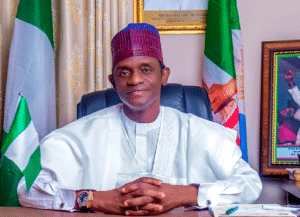 A Chieftain of the All Progressives Congress, APC in Delta State, Steve Ossai Uweh, has called on the Governor Mai Mala Buni-led Caretaker/Extraordinary Convention Planning Committee (CECPC) to consider ceding the Chairmanship slot of the party in the state a politician of Ndokwa extraction noting that it is the only to get overwhelming support from the people of Ndokwa/Ukwani Federal constituency.

This was revealed in a September 18, 2021 dated letter addressed to the Chairman of the party’s Caretaker Committee who doubles as the governor of Yobe State, Buni stating that the least the people of the three local areas of Ndokwa nation, which he described in his letter as the second largest homogenous entity in the oil-rich state will accept from the broom party to produce in the forthcoming state Congress is a Chairman of Ndokwa extraction.