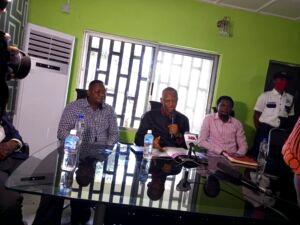 ..says most govt officials are enemies of the people, democracy

The Chairman of the Cross River State Anti-Tax Agency Dr. Emmah Isong has vowed to report to the EFCC any politician including Local government Chairmen , Commissioners who will dare to approach him with intention to induce him with revenue points to overlook illegal tax in the state.

Dr Isong also threatened to expose by name shaming politicians in the state who are behind illegal taxes describing them as enemies of the people and the state.

Bishop Isong made the vow in Calabar while reacting to observations and the operations of recalcitrant tax consultants purportedly representing local government councils and MDA’s of the government.

He said the politicians were enemies of the people and democracy and as such do not deserve to be part of the democratic family in the state.

“I will not hesitate to expose and report to EFCC, any local government Chairman or Commissioner who…