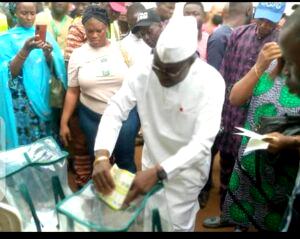 The Peoples Democratic Party, PDP National Vice Chairman Southwest, Ambassador Taofeek Arapaja, has charged party faithful to approach their political aspirations with peace, saying that losing and winning are the only outcome in any democratic setting.

Arapaja, in a statement made available to Saturday Vanguard, by his special assistant on Media and Publicity, Bamitale Ibrahim, ahead of the party’s ward congress, holding on Saturday (today), added that PDP, being the most democratic party which always gives level playing ground to all members will once again go by its core values.

The statement reads: “I would implore all members of our party to be law abiding and work in the most democratic way which no doubt have become our trademark since 1999.”