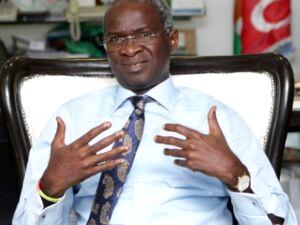 Minister of Works and Housing, Mr. Babatunde Raji Fashola has distanced himself from campaign posters bearing his name and photograph and that of Governor Babagana Zulum of Borno State as presidential and Vice presidential candidate, respectively for the 2023 general elections.

Although, the posters currently making the wave in the social media just at the erstwhile Governor of Lagos denied to have nothing to do with the promoters of the campaign materials under the aegis of Nigeria Project 2023.

Fashola in a rebuttal issued by his Special Adviser, Communications, Mr. Hakeem Bello, Sunday, in Abuja, said the groups promoting The Nigeria Project 2023 were unknown to him and the ruling All Progressives Congress, APC.

The minister explained further that his major focus now is to deliver on the mandate of President Muhammadu Buhari for an expanded and upgraded road transport infrastructure; and affordable Housing nationwide in order to…