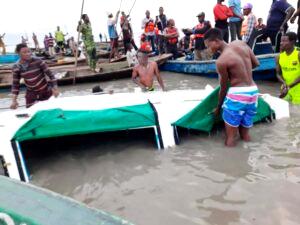 Local divers, fishermen and boat operators in Lagos State on Monday, rescued a sailing boat with 18 occupants including the operators on board.

However, one of the occupants was presumed dead while seventeen others were rescued.

The fishermen were said to be on water at that time and they put a call across their colleagues and local divers around the area before the arrival of government agencies.

The Acting Coordinator, National Emergency Management Agency (NEMA), Lagos State, Ibrahim Farinloye who confirmed the development said the local divers, fishermen and boat operators were the first responders at the scene of the incident. .

According to him, emergency responders from state and federal also joined the operation and hastened the exercise which lasted for less than 30 minutes.

Farinloye said the boat operators have been trained on what to do before the arrival of government agencies.