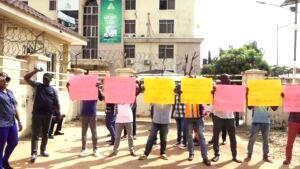 —Alleges embezzlement of N2bn, administration by mgt
–No such money was embezzled says mgt

THE Association of Senior Civil Servants Of Nigeria, Monday protested and picket the National Lottery Regulatory Commission, NLRC, over the alleged disappearance of N2 billion from the commission’s treasury.

The labour union also accused the management of maladministration and introducing unfriendly policies.

But in a swift reaction, the management has denied allegations of embezzlement, saying that President Muhammadu Buhari-led administration has zero-tolerance for corruption.

The management through its Head, Public Affairs, Magnus Ekechukwu wondered how N2 billion could be embezzled in this era of Treasury Single Account, TSA, adding that anyone that indulges in any form of corrupt practices will face the consequences.

The management also said that the issue of maladministration as alleged does not exist under the supervision of Mr. Lanre…