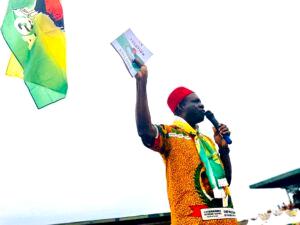 In the words of the great French poet, Victor Hugo, “no army on earth can stop an idea whose time has come.”

On Saturday September 25, 2021, Ndi Anambra became witnesses to the truth of this assertion when a record-setting crowd turned up at Alex Ekwueme Square Awka to flag-off Chukwuma Soludo’s gubernatorial campaign.

It was a rainy day. The rain came in the morning with the intention of keeping the day company for a long time. It kept its resolve beyond the usual mid-day mark. But neither the early morning rain nor the battery of lawsuits that trailed the party primary could stop Ndi Anambra from trooping out in their largest imaginable number to acknowledge Chukwuma Soludo as an idea whose time has come.

Indeed, neither rain nor lawsuits could get in the way of the people’s resolve to march into a new phase of possibilities with a man whose genius has been acknowledged from the rustic charms of Isuofia to the rarefied halls of Harvard…