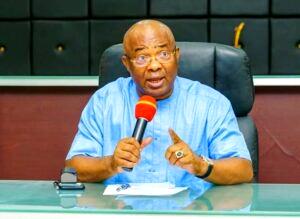 A sociopolitical group, the Global Association of Concerned Imo Youths, (GACIY) has accused the Imo State chapter of the Peoples Democratic Party (PDP) of allegedly working with the Rivers State Government to frustrate the efforts being made by Governor Hope Uzodimma administration in the state to recover 17 Imo oil wells erroneously ceded to Rivers.

The group made the allegation in a press release signed by its convener, Collins Ughalaa, and made available to newsmen in Owerri on Monday, September 27th, 2021.

The government of Imo State had made a formal complaint over the attribution of 17 oil wells situated in communities within the state, particularly those of Oguta LGA, to Rivers State for 20 years.