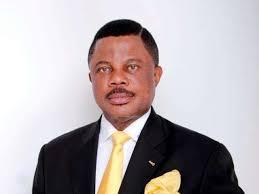 …Says Buhari not in support of action

…President warns against intimidation by any party

…Adds: Insecurity in Northeast, Northwest worse than in Anambra

…Boasts of APGA’s victory in Nov 6

THE Anambra State Governor, Chief Willie Obiano, Thursday blasted the Attorney General of the Federation, AGF, and Minister of Justice, Abubakar Malami for suggesting that the Federal Government may consider the possibility of declaring a state of emergency in the state if the security situation continues to degenerate.

Governor Obiano also said that Malami’s comment did not have the support of President Muhammadu Buhari, as the President never mentioned any such to him (Obiano) when two of them met at the Presidential Villa, Abuja.

Speaking with State House correspondents after meeting behind closed-doors with the President, the Anambra state governor said that President Buhari warned political parties against using…