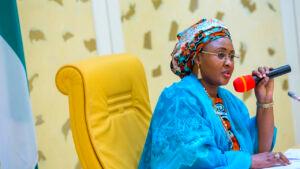 .As Akeredolu say women participation In politics must go beyond singing at rallies

Ondo State Governor, Arakunrin, Rotimi Akeredolu, Lagos State Governor, Mr Babajide Sanwo-Olu and Dr. Aisha Buhari, wife of Mr. President have said women must not be confined to the back seat if Nigeria must prosper the more, describing them as having the ability to rescue Nigeria from its quagmire if allowed to lead the country.

Akeredolu, Sanwo-Olu and Aisha Buhari made the remarks, yesterday, at the opening ceremony of the 21st National Women Conference, NWC, organised by the Committee of Wives of Lagos State Officials COWLSO, held at Eko Hotels and  Suites. The three-day conference theme is ‘Awake’.

Arakunrin, who was the Special Guest of Honour, said the men have failed the system and it was high time women took over the lead.

According to Akeredolu: “There is a need for women to start taking the issue…