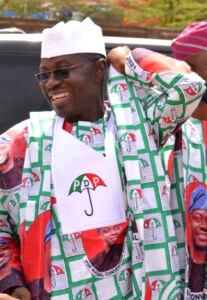 The fierce battle for the office of the deputy national chairman (South) of the Peoples Democratic Party, PDP, has come to an end with the election of former Oyo State deputy governor, Ambassador Taofeek Arapaja.

Arapaja’s emergence again underscores the growing influence of governors, many of whom had their choices, coast home to victory at the convention without breaking a sweat.

He was the candidate of the Oyo state governor, Engr. Seyi Makinde.

The race for the office initially had Arapaja, Oyinlola and Professor Wale Oladipo who latter stepped down paving way for a two-horse race pitching the ex-governor against the erstwhile deputy governor.