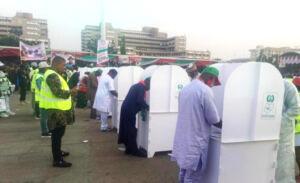 The Peoples Democratic Party, PDP, has just elected a new set of members into its National Working Committee, NWC, to take over the leadership of the party.

Twenty-one people were elected at the party’s national convention which began on Saturday, October 30, and will conclude today, Sunday, October 31 at the Eagle Square in Abuja.

See the full list of the newly-elected national officials, showing that only three offices were actually contested for.

The 18 positions were settled via consensus agreement: