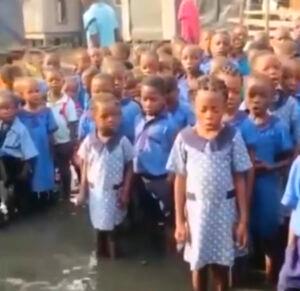 Concerned Nigerians have expressed sadness and condemnation over a an emerging video that went viral on social media showing pupils of yet to be named school in Lagos observing the daily morning assembly in a flooded school premises.

The leaked video on Saturday, has generated heated reactions from Nigerians, calling for severe sanction on the proprietor of the school
The video shown the pupil of ages 5 to 9 years reciting the National Anthem and Pledge of Nigeria standing in a stagnated water in one of the riverine communities in Lagos State.

The school was later identified to be a privately run school, located in Makoko slum area of the state.

Some Nigerians questioned the rationale of the Lagos State Government giving approval to such school proprietor.

Fatai Olaniyi remarked: “Act of wickedness which shall be visited with consequences. Politics in Nigeria is a criminal adventurism.