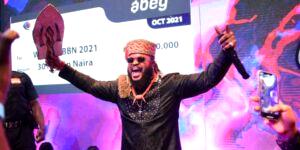 In a recent interview, he said: “Big Brother, you know I love you so much.

“You made me a star; anything I asked, you always do for me.

“If you could do one thing for me; scrap out married people from the show for the sake of the platform.

“A lot of people said this year edition taught them a lot of things.

“Married people are humans. Not all of them have the strong zeal to wade up distraction.

“For instance, Tega is still suffering from her last experience on the show, same thing Boma.

“The fans are still dragging them till today,” White Money.

Recall that Tega Dominic, married mum of one, was in an alleged ‘scripted’ romance with former housemate, Boma on the show.

The post BBNaija not for married persons, says White Money…