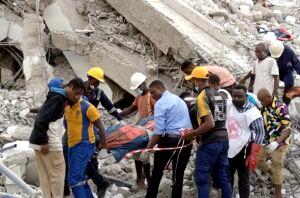 The Southwest Coordinator of National Emergency Management Agency, NEMA, Ibrahim Farinloye, says five people were rescued alive while four dead bodies were recovered from the debris of the 21-storey building that collapsed this afternoon on Gerald road, Ikoyi, Lagos.

Speaking to Vanguard, Farinloye said the rescue operation is still in progress as they are getting closer to where some of the construction workers are being trapped.

However, he couldn’t ascertain the total number of casualties as well as the number of persons trapped in the building.

Vanguard also gathered more people have been rescued and currently undergoing treatment at the time of writing this report.