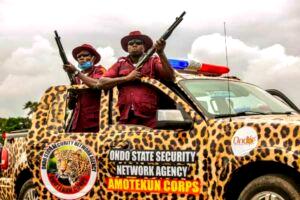 No fewer than 18 Northerners hidden in a trailer loaded with beans have been arrested by the personnel of the Ondo state security outfit codenamed Amotekun in Akure, the state capital.

They claimed they came from Sokoto state and were trailed from Ilesa-Akure highway to Arakale road, in Akure metropolis by personnel of the security outfit.

Parading them in Akure, Commander Ondo, Amotekun, Chief Adetunji Adeleye said ” Our men while on duty saw a suspected vehicle filled with bags of beans and we trailed the vehicle to Arakale.

“They stopped along Arakale road and while searching the vehicle, we realized they were not carrying only beans, but 18 young men hid in the truck.

“We asked them where they were going, but they did not know their destination as some of them said Sokoto while others said Jigawa State.

“We took them to our office, gave them food to eat and called on the Head of Hausa community in Ondo State to take them back to their…