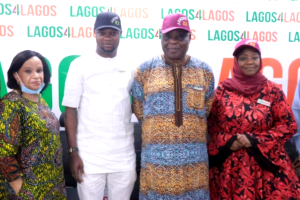 A high-powered delegation of the People’s Democratic party, PDP, on Monday, visited the Ikeja headquarters of the Lagos4Lagos movement, a group within Lagos All Progressives Congress, APC, seeking collaboration with the party.

The visit, it was gathered was in continuation of the party’s consultation with critical stakeholders across Nigeria following the success of its recently held national convention.

The delegation led by a Board of Trustee, BOT, member of the party, led by media magnate, Chairman Emeritus of Daar Communications Plc, High Chief Raymond Dokpesi visited the Liberty Place, of Lagos4Lagos movement to extend an invitation to the Lead Visioner, Dr. Abdul-azeez Olajide Adediran, to join it’s fold ahead of the 2023 gubernatorial election.

Speaking, Dokpesi, who also doubles as the head of Atiku Abubakar campaign organization, acknowledged the years of hard work of…