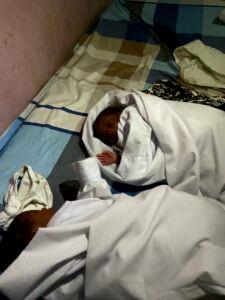 Twin babies — a boy and a girl — born on October 22 at Supreme Royal hospital in Lagos, have been detained by the hospital management over unpaid balance of N215,000 bills.

According to the mother, Sadiat Alao, she gave birth through Caesarean section, which she didn’t planned for and was billed N350,000.

She, however, said the father of the twins had been paying bit by bit, but was unable to offset the bill.

She said: “He has not showed up for over one week because of the balance and the more we stay in the hospital, the more we will continue to incur more bills.

“I am begging kind-hearted Nigerians to come to my aid because of these twins.”

Efforts made to talk to the Medical Director proved abortive as we were told he wasn’t available.