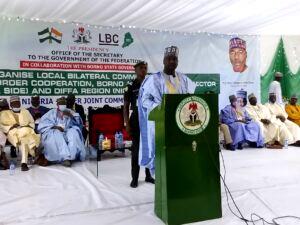 The Secretary to the Government of the Federation, Boss Mustapha has said that the Nigeria/Niger Joint Commission for Cooperation (NNJCC) is to promote border communities’ mutual understanding and peace.

According to him, the Local Bilateral Committee (LBC) was to identify and propose the implementation of development projects in the Lake Chad Basin.

Mustapha represented by the Permanent Secretary (Political), Andrew Adejo disclosed this on Monday while opening the LBC meeting in Maiduguri at the Government House.

“As you’re all aware; LBC was created in July 1990 in Maiduguri between Nigeria and Niger by signing an agreement for a joint commission for cooperation,” he said, stating that the objective of cooperation was to promote mutual understating, peace and well-being of people in the communities.

He said the resolution of the committee was ratified by the Council of Ministers at its 40th session on December 15, 2020, in…