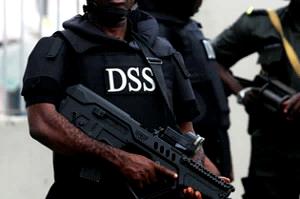 The Department of State Services, DSS, has again, denied journalists access to the court room where trial of detained leader of the Indigenous People of Biafra, IPOB, Nnamdi Kanu, is expected to resume today.

Kanu, who was re-arraigned before trial Justice Binta Nyako of the Abuja Division of the Federal High Court, is facing a seven-count amended treasonable felony charge the Federal Government preferred against him.

As a early as 6am when this reporter arrived at the court which is adjacent the Federal Ministry of Justice, heavily armed operatives of the DSS ordered him to turn back.

The hooded operatives, who barricaded all routes leading to the court, equally barred both print and broadcast Journalists from major media organizations from entering the court premises.

“We are working on instruction. We can’t let you people in”, one of the operatives told newsmen.

As at 8:23am when this report was filed in, the operatives had yet to…