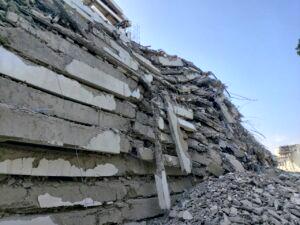 As search and recovery operations is wounding up at the scene of the collapsed 21 storey building on Gerrard Road, Ikoyi, two additional bodies were on Wednesday, recovered, making the total casualties to reach 45, according to Lagos State Goverment.

Meanwhile, the state government said contrary to speculations, no directive has been given for the demolition of the two high-rise buildings standing at the site of the 21-storey collapsed building.

The state Commissioner for Information and Strategy, Mr Gbenga Omotoso, in a statement on Wednesday, made the remarks, while giving an update on the incident.

According to Omotoso: “The Panel of Inquiry instituted to establish issues surrounding the collapse of the building has continued to sit and an integrity test is yet to be conducted on the buildings.

“It is, therefore, wrong to assert or speculate that the buildings will be demolished.

“Two more bodies were recovered from the site today….