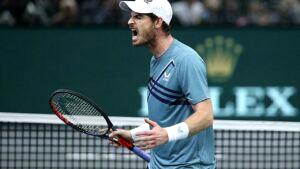 Andy Murray produced one of his best performances since hip surgery to defeat top seed Jannik Sinner and reach the quarter-finals of the Stockholm Open.

Murray had lost a succession of close matches to top-20 players before defeating then world number 10 Hubert Hurkacz in Vienna a fortnight ago.

Italian Sinner is the same ranking and one of the hottest young prospects in the game but Murray produced a clean and impressive display, breaking his 20-year-old opponent twice in the second set on the way to a 7-6 (4) 6-3 triumph.

Speaking on court, the 34-year-old said: “It was a very tough match. He hits the ball huge from the back of the court so a lot of long rallies and a lot of running but it’s probably my best win this season. I want to keep it going now.”

Murray, who is trialing a new coach this week in Spaniard Esteban Carril, has played a series of long tie-breaks recently but here he took his…