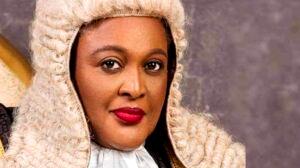 Managing Editor of THISDAY newspapers, Mr. Bolaji Adebiyi, on Thursday, said that Stanley Nkwazema, a suspect arrested in connection with the invasion of the home of Mary Odili, a justice of the supreme court, isn’t a staff of the media organisation.

Nkwazema was one of the suspects paraded by the police on Thursday.

But in a statement, THISDAY said the suspect resigned from the company 15 years ago.

The statement reads: “The attention of the management of THISDAY NEWSPAPERS has been drawn to the news making the rounds that Mr. Stanley Nkwazema, one of those suspected to have invaded the home of Justice Mary Odili claimed to be a staff and Contributing Editor of THISDAY,” the statement reads.

Contrary to his claim, Mr. Nkwazema is neither a Staff of THISDAY nor a Contributing Editor. He was a Sports Correspondent and resigned more than 15 years…