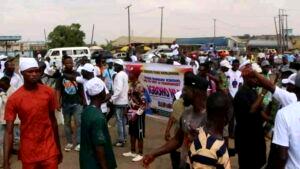 Followers of the detained Yoruba Nation agitator, Chief Sunday Adeyemo also known as Igboho have taken to the street on Ibadan, the Oyo state capital, asking the federal government to push his unconditional release.

Vanguard reports that the followers, who gathered in front of Igboho’s residence at Soka area, Ibadan later took the protest to Lagos-Ibadan expressway.

The protesters carried banners with different inscriptions like “Free Sunday Igboho, he is not a terrorist”, “Igboho Ni Mi”, “Yoruba Nation now” and many others.

Speaking with newsmen at the scene, one of the leaders of the protest, Comrade Sola Olalere accused the federal government of being behind Igboho’s continuous detention adding that the case is different in the fight against banditry and terrorism.

He appealed to traditional rulers in the southwest to raise their voices and join the campaign for the release of Sunday Igboho.

He said “What we are saying to the…