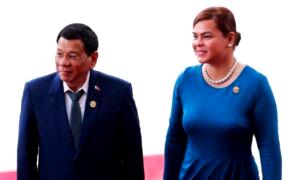 The daughter of Philippine President Rodrigo Duterte registered on Saturday as a candidate for vice president in next year’s elections, ending months of speculation.

A lawyer filed the certificate of candidacy of Sara Duterte-Carpio, the current mayor of the southern city of Davao, for the centre-right Lakas-CMD political party, which she only joined two days earlier.

The 43-year-old mayor took the spot of a Lakas-CMD member who had registered in October but was considered a placeholder.

There was no immediate statement from Duterte-Carpio or Lakas-CMB about who the party’s presidential candidate would be.

Another member, Anna Velasco, had registered to be its presidential candidate last month.

Parties have until Monday to switch out their…